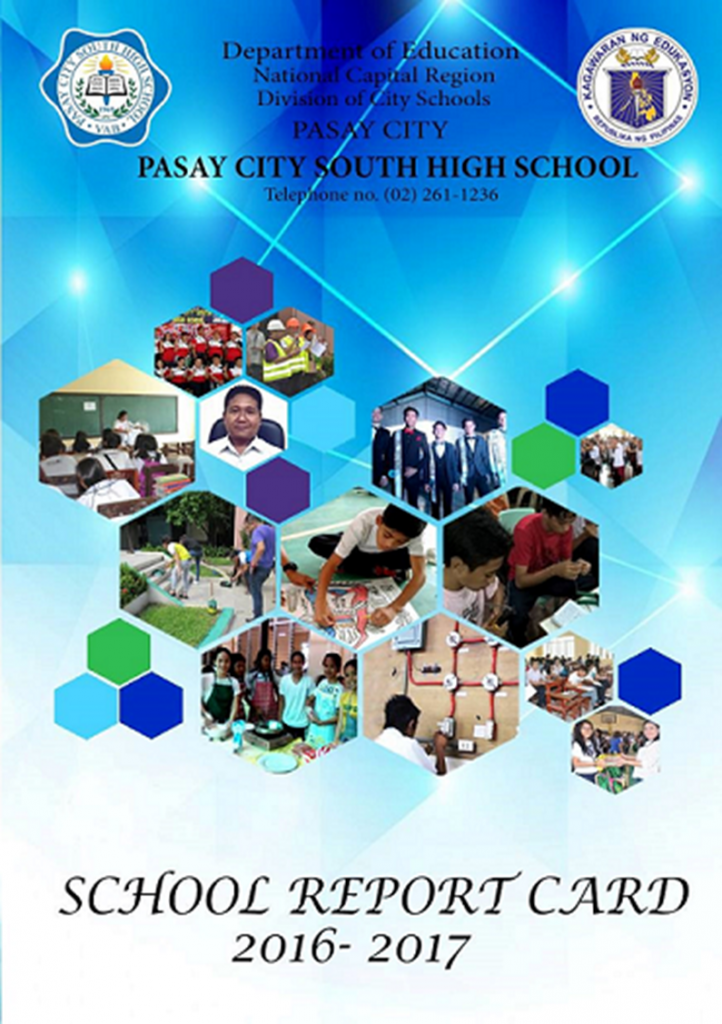 INTRODUCTION
This School Report Card (SRC) of Pasay City South High School for SY 2016 – 2017 has been made and subsequently submitted to the Schools Division Office (SDO) of Pasay for a meaningful purpose that is to check, monitor and evaluate the performance of the school for the last three consecutive school years.
The SRC is an embodiment of a collaborative efforts, time, space committed by all the stakeholders. It provides the basic and primary components of the school governance, leadership and transparency. The data contained in this SRC are practically used as basis for further planning and improvement in the operations of the school which is done through concerted efforts of all the stakeholders headed by School Head and supported by all the well-meaning stakeholders.
It is expected that more recommendations and suggestions are being sought from other people in furtherance of this tool. 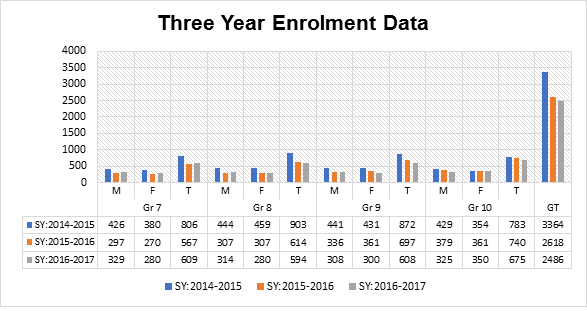 Continuous decrease in the enrollment for  the previous years can be attributed to the opening of the new high schools in  Fort Bonifacio, Taguig and the Pres. Corazon C. Aquino National High School in Brgy 184, Maricaban, Pasay. Despite the official  turn over of the two buildings, still the enrolment has decreased which may be attributed to opening of  different schools in the community where the students live nearby. 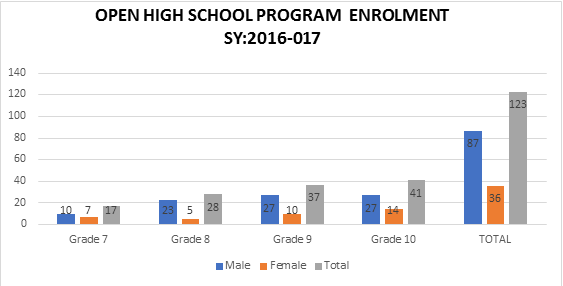 The data above shows the enrolment in the Open High School Program which commences only this SY 2016-2017.  Grade 10 has the highest enrolment while Grade 7 has the lowest enrolment.  There are 123 enrollees in the said program.

Data above is the  ALS enrolment. Although  there is a decrease of around 7% in this  Year’s enrolment in the Alternative Learning System, the conduct of such mode of learning is still significant for those who like  to acquire diploma or certificate of graduation or completion.  It is good to note that most of the learners in the ALS were able to attain a passing mark in the recently concluded examination. 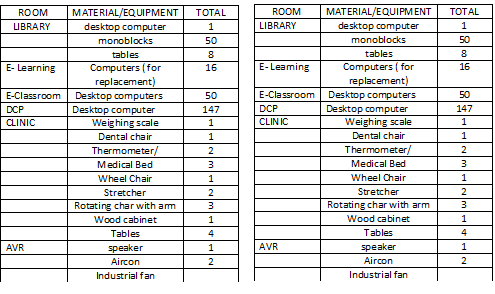 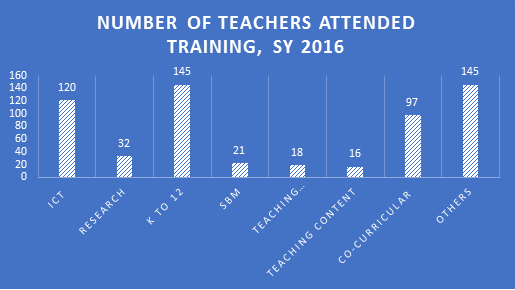 From the above figure, it shows that majority of the teachers have attended trainings and seminars on Learning Action Cell, K to 12 and School-based management.    Trainings or seminars on Learning Action Cell happens every quarter    for the TQC in each grade level and by department.    Almost all teachers are now equipped with trainings on K to 12 since this is fully implemented this school year.  Seminars and trainings on Result-based  performance  management system and the accomplishment of the IPCRF was done during the Semestral In – service trainings.   ICT trainings were conducted also during the In- set where the  learning materials are developed.  Technical support for advisers and other teachers were  given also specially in accomplishing Learning Information System (LIS). Selected teachers by department attended seminars conducted by  Red Cross, Rotary Club, and  School Disaster Risk Reduction Committee. 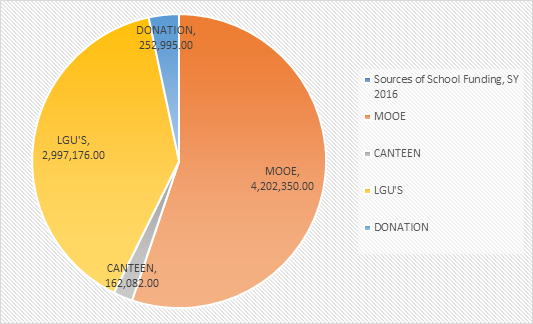 The pie graph presented above shows the major source of  school funds coming  from the MOOE amounting to  4, 202 350.00 . It  takes the major expenses of the school. The increase in the budget is due to the opening of the Senior High  School Program.  The next biggest  chunk of fund  goes to the  salaries and wages for security guards , contractual utilities and the Front Runners which come  from  the Local Government Unit.   Other expenses are obtained from the Canteen fund which are used to fund the   feeding program, student/teacher development , HE expenses  as well as the clinic expenses in medicine and other needs.

The school received a total amount of 252, 995.00  consisting  of cash and in- kind through the  Adopt-a- School Program being implemented by the Department of Education to  schools nationwide. 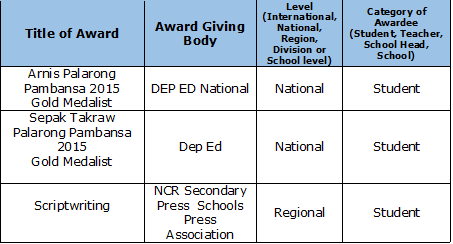 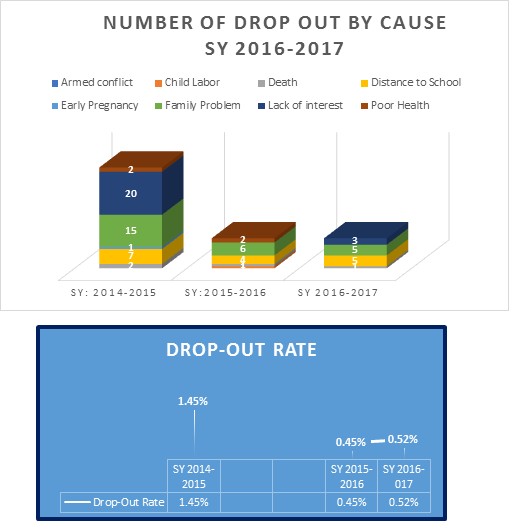 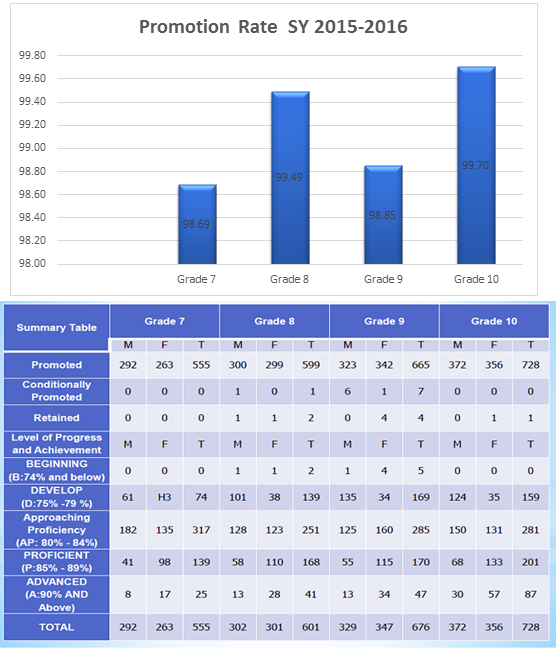 From the data presented above, it can be calculated that 97.94 percent of the learned passed and promoted to the next grade level. The decrease of 2.06 % can be accounted  for the drop outs and those who are retained since there were not able to meet the minimun expectation of the learning areas. 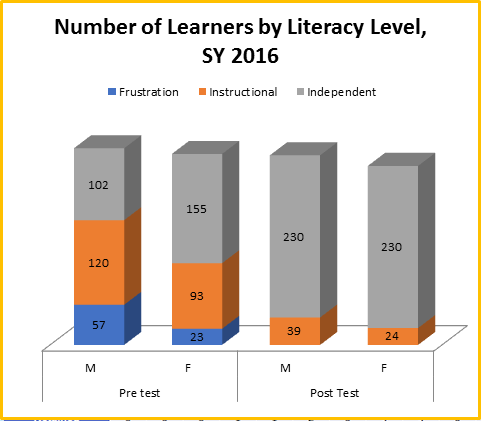 The graph presented above shows that in the Pre Test result of the learners using the Informal Reading Inventory (IRI) test, there are 80 composed of Male and Female learners who belong to the Frustration   reading level and a total of 213 learners in the instructional level, 257 in the independent level respectively.  However,  in the Post test only 63 learners remain in the instructional reading level and 460 independent level, with none of the learners remain in the frustration reading  level.  This post test result reveals that the different intervention programs employed during the school calendar year have achieved the primary goal on increasing the literacy  level of the students and therefore have realized its purpose- to increase one’s comprehension and become functionally literate. 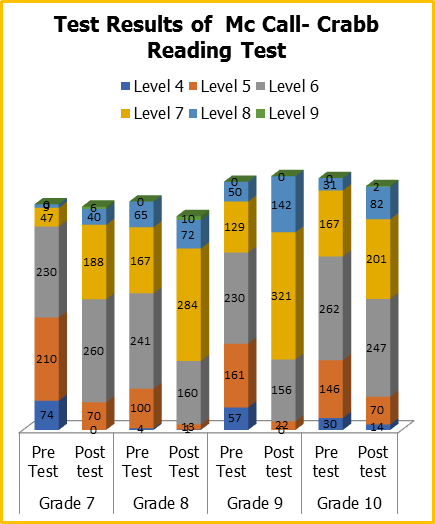 Based on the presentation above, the post test results of the Mc-  Call Crabb reading test reveal that from Grade 7 to Grade 10, the reading levels of learners gained a significant increase compared to their pre-test performance.  Specifically the learners reading level 4, 5, and 6 decreased while learners reading level 7,8 and 9 gained considerable increases on their post –tests.   This positive outcomes could prove that the different intervention programs employed during the current school calendar year are deemed effective in improving the literacy of learners. These positive results could be attributed to the  collaborative efforts of teacher and the support of the administration that led to the realization of the success of the program. 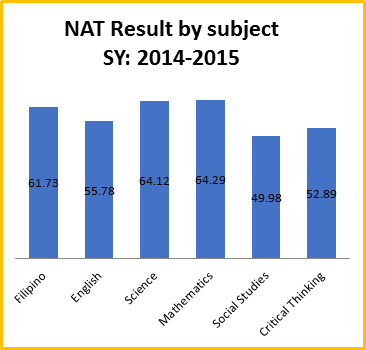 The graph shows the Mean Percentage Score in the National Achievement in  of the SY 2014-2015 has decrease by 2. 08 which is from  60.72, it has  become 58.64. However, among the   secondary school in the Division, our school ranked first among the regular public and private schools,   Furthermore, among the five major subjects, Filipino and Science obtained an increase of 3.77 and 14.28 respectively. This year, all the necessary interventions and strategies will be employed to attain the target increase of at least 5% until  the desired highest possible  MPS is attained. 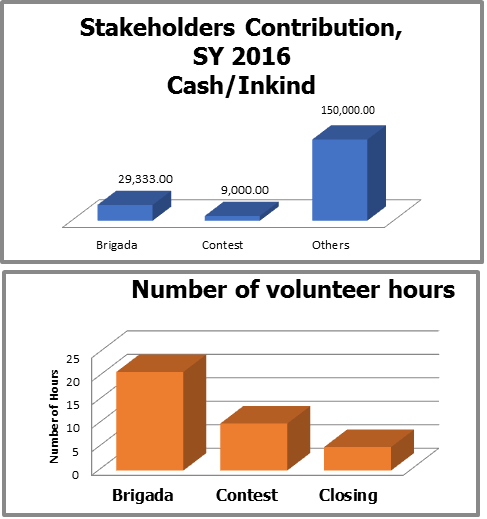 Contributions from stakeholders and NGO’s are presented above. The school has generated funds during the Brigada  amounting to around twenty nine pesos.  The nine thousands is from the PTA who gives at least one thousand for every contest/competitions that the school has joined.   This year, the school receives 304 pieces of scientific calculators from Caltex Philippines in the Fuel Your School Project.

The total amount of the items in pesos is one hundred fifty thousand (P150, 000.) 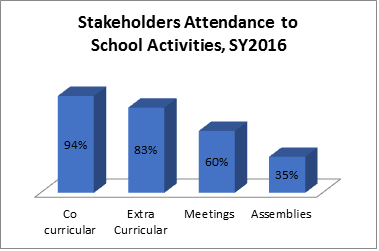 The graph shows that participation of the stakeholders is evident.  in the attendance of stakeholders to school activities, co- curricular (Clubs/ Organizations) and extra- curricular (Brigada Eskwela)  events are attended gracefully by the parents.  Parent-Teacher Meetings every quarter has only 60 % attendance despite of  invitation through letter. 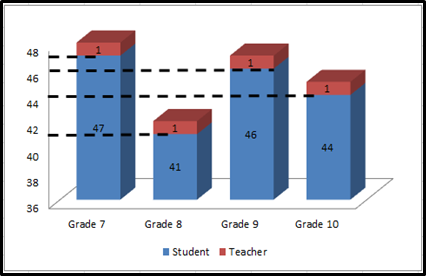 The graph above represents the  learner – teacher ratio  which illustrates that there is an average of 45 learners per teacher.  It also denotes that at present  the class size fall within the average number of learners per class. 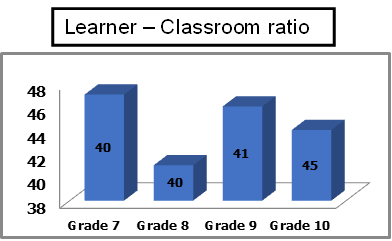 From the above illustration, it implies that an  acceptable average number of  learners occupy  a desired classroom size of 9 by 7.  The room is equipped with enough chairs and proper ventilation. 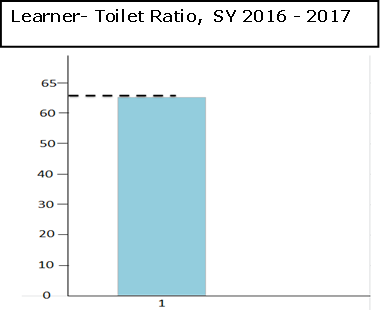 The graph shows the learner- toilet ratio. It shows that the ratio is beyond the standard of 1 toilet is to 50  learners.    In this presentation,  there is an average of 63 learners  from two Grade levels  in every shift who are using one  toilet.  For this school year, three shifts were employed to ensure daily contact with learners.  This happens because of the structural integrity that until now is not yet fixed. 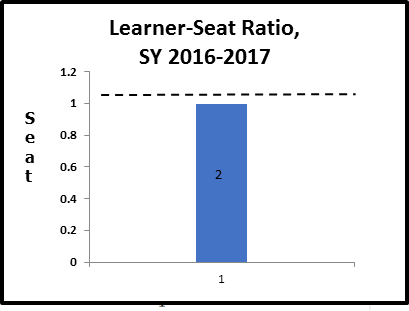 It shows that there is no shortage in seats for this current  school year since the number of sections per Grade level  decreased  from 80 sections to 60 sections composed of all Grade levels.  Furthermore, it can be said that  1 chair is used by three learners since the school is following a three shift schedule which is due to structural integrity issue of the two buildings.

Zero drop out for SY 2016-2017 aims to eliminate dropouts beginning SY 2016-2017. Causes of dropping from school were rooted through root caused analysis.  Home visitation and conference  with the parents, whether in school or at home, is asked from all teachers, advisers and subject teachers. Modules, hand outs and even on line assignments/lessons were given to the concerned learner who is at risk of dropping out to ensure that learning will take place and the child will not be left behind.

Since these interventions were applied  effectively, it is therefore decided that the above-mentioned interventions will continue to be practiced until we successfully reach zero drop-out 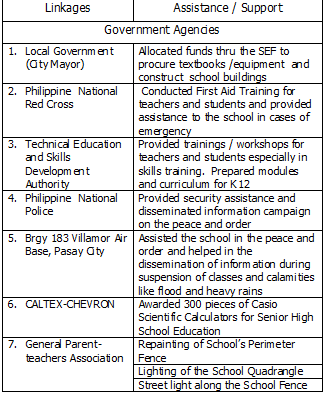